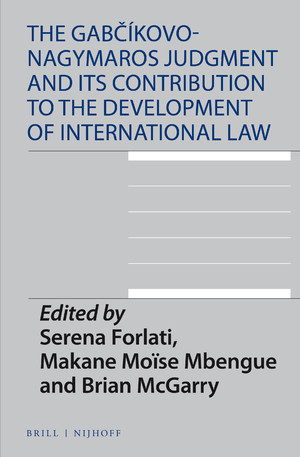 Prof. Panos Merkouris, PI of the TRICI-Law project, recent had an article published in a collected book entitled ‘The Gabčíkovo-Nagymaros Judgment and Its Contribution to the Development of International Law‘. The book, edited by Serena Forlati, Makane Moïse Mbengue, and Brian McGarry, ‘offers a comprehensive analysis of both the management of this case and the substantive legal issues at stake. It also reappraises the Court’s findings in light of subsequent developments in the international legal order, focusing on the role of the ‘World Court’ in fostering such developments.’

Termination of Treaties: the Contribution of the Gabčíkovo-Nagymaros Judgment

Pg 78-97: ‘This Chapter will discuss the contribution of the Gabčíkovo-Nagymaros Judgment1 to the development of international law in the context of termination of treaties. As evidenced by the previous sentence, there are two key axes of analysis: (i) development, and (ii) treaty termination. With respect to the first axis, development can come in a variety of forms. It should not be equated only to breaking with the past or trailblazing; rather, it can manifest itself in a more incremental or indirect way, for instance by stating not only what the content of the rule is, but also what it is not. It is in this wide gamut of manifestations of development that the contribution of Gabčíkovo-Nagymaros really shines through.’

This site uses Akismet to reduce spam. Learn how your comment data is processed.